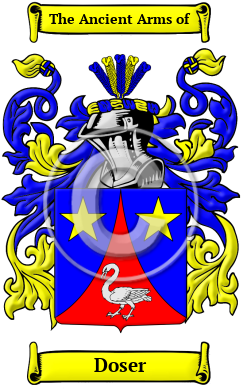 The name Doser, which is a local surname, reveals that the original bearer of the name once lived, held land, or was born in Schleswig-Holstein, which is the northernmost state in western Germany. This is the homeland of the proud surname Doser. By and large, hereditary surname were formed in Germany when areas of Schleswig, and most of the German states, were a part of the Holy Roman Empire. At this time, as the population of Europe swelled and travel became easier, people began to encounter others sharing their own name and they avoided confusion by adopting a second name. A common form of surname found in Schleswig are those that are derived from nicknames. Nickname surnames were derived from an eke-name, or added name. They usually reflected the physical characteristics or attributes of the first person that used the name. The surname Doser was a name for a loud or boisterous person. The distinguished name Doser is derived from the Old Germanic word dossen, which means to speak loudly or to make noise.

Early Origins of the Doser family

The surname Doser was first found in East Friesland, out of which the name quickly spread across the northern coastlands of Germany, in particular to Holstein and Mecklenburg. The name came from humble beginnings but gained a significant reputation for its contribution to the emerging mediaeval society. It later became more prominent as many branches of the same house acquired distant estates, some in foreign countries, always elevating their social status by their great contributions to society. The variations Dose and Dohse were found particularly frequently in Nordelbingen, as well as throughout Schleswig-Holstein and Hamburg. In the Middle Ages, Dose became quite popular as a first name among knights. Chronicles mention, for instance, the knight Dose Block of Holstein in 1371. Chronicles also mention the figure Doso von Helle, who owned the village Dosenbeck near Preetz in Holstein. Its use as a last name may have stemmed from the area in East Friesland where the Dose river flows into the Ems.

Early History of the Doser family

This web page shows only a small excerpt of our Doser research. Another 186 words (13 lines of text) covering the years 1291, 1337, 1476, 1740, 1762, and 1764 are included under the topic Early Doser History in all our PDF Extended History products and printed products wherever possible.

Another 36 words (3 lines of text) are included under the topic Early Doser Notables in all our PDF Extended History products and printed products wherever possible.

Doser migration to the United States +

Doser Settlers in United States in the 18th Century

Doser Settlers in United States in the 19th Century