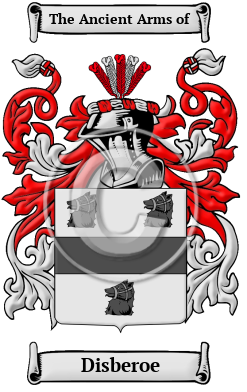 Early Origins of the Disberoe family

The surname Disberoe was first found in Northumberland at Desborough, a town and parish in the union of Kettering, hundred of Rothwell. The parish dates back to at least the Domesday Book of 1086 where it was listed as Dereburg. [1]

Early History of the Disberoe family

Distinguished members of the family include John Desborough (1608-1680), spelt John Disbrowe and John Desborow, of Eltisley, Cambridgeshire, an English soldier and politician who supported the parliamentary cause during the English Civil War. He was the second son of James Desborough...
Another 41 words (3 lines of text) are included under the topic Early Disberoe Notables in all our PDF Extended History products and printed products wherever possible.

Disberoe migration to the United States +

Disberoe Settlers in United States in the 17th Century