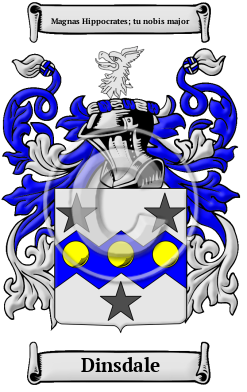 Early Origins of the Dinsdale family

The surname Dinsdale was first found in Durham at Low Dinsdale or Over Dinsdale, a parish, in the union of Darlington, S. W. division of Stockton ward. "A sulphureous well was discovered in [here] 1789, at the depth of seventy-two feet from the surface; it received the name of Dinsdale Spa, and has become a place of resort during the summer season." [1]

Early History of the Dinsdale family

This web page shows only a small excerpt of our Dinsdale research. Another 82 words (6 lines of text) covering the years 1712 and 1800 are included under the topic Early Dinsdale History in all our PDF Extended History products and printed products wherever possible.

Notables of the family at this time include Thomas Dimsdale (1712-1800), 1st Baron Dimsdale, an eminent English physician, whose work on inoculation for small pox caught the...
Another 27 words (2 lines of text) are included under the topic Early Dinsdale Notables in all our PDF Extended History products and printed products wherever possible.

Dinsdale migration to the United States +

Dinsdale Settlers in United States in the 17th Century

Dinsdale Settlers in Australia in the 19th Century

Historic Events for the Dinsdale family +