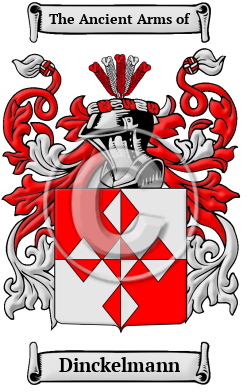 The ancestral home of the Dinckelmann family is in the German state of Bavaria. The name Dinckelmann is an occupational hereditary surname, a type of surname that was taken from a word describing or common to the profession of the original bearer. It is a name for a farmer or a dealer in spelt, which is a kind of wheat. Spelt, which is a derivative of the Old Germanic word Dinkel, was a grain like barley and wheat that was grown extensively in the German speaking states during the Middle Ages. Spelt was sold as a cereal and formed a large part of the diet at this time. Nonetheless, Dinckelmann is also a local name for a person that came from Dinkelsbuhl, a town in Bavaria in the south of Germany. Dinkelsbuhl, which is one of the best preserved medieval towns, dates back to the 14th century. The Dinckelmann family possessed vast estates and resided in an elegant feudal manor. During the Middle Ages, they became a part of the landed aristocracy and they wielded considerable prestige and influence in the region of Bavaria. Nonetheless, the family expanded into other parts of the German territories after the 16th century.

Early Origins of the Dinckelmann family

The surname Dinckelmann was first found in Bavaria, where this family became a prominent contributor to the development of the district from ancient times. Always prominent in social affairs, the name Dinkle became an integral part of that turbulent region as it emerged to form alliances with other families within the Feudal System. Ancient chronicles first mention one Burkart der Dinkel of the town Villgenau in the year 1370.

Early History of the Dinckelmann family

In the medieval era, many different cultural groups lived in the German states. There are thus many regional variations of German surnames from that era. Westphalians spoke Low German, which is similar to modern Dutch. Many German names carry suffixes that identify where they came from. Others have phrases attached that identify something about the original bearer. Other variations in German names resulted from the fact that medieval scribes worked without the aid of any spelling rules. The spelling variations of the name Dinckelmann include Dinkel, Dinckels, Dinckel, Dinckle, Dinkler, Dinckelmann, Dinkelman, Tinkel, Tinckel and many more.

Prominent among members of the name Dinckelmann in this period include Christian Dingler (1802-1858) German founder of the "Dinglerwerk" manufacturing business at Zweibrücken in 1827. He invented a version of a Toggle press which he called the "Zweibrücker-press," but more popularly was known as the "Dingler Press." The printing press was immensely popular throughout Europe...
Another 55 words (4 lines of text) are included under the topic Early Dinckelmann Notables in all our PDF Extended History products and printed products wherever possible.

Migration of the Dinckelmann family

German settlers were among the most common to come to North America between the mid-17th and mid-20th centuries. Poverty and religious persecution drove many Bavarians to make this long trek. tenant farmers were also enticed by the prospect of owning land. From east to west, these German immigrants populated the United States, settling in Pennsylvania, Texas, New York, Illinois, and California. Ontario and the prairie provinces of Canada also provided homes to many. Early settlers bearing the Dinckelmann surname or a spelling variation of the name include: Michael Dinckel, who arrived in Philadelphia in 1752. Jacob Dinkel arrived in Philadelphia in 1836; while John Dinkel landed in Philadelphia in 1860.