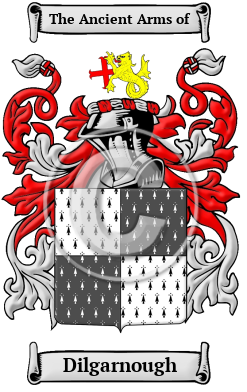 Early Origins of the Dilgarnough family

The surname Dilgarnough was first found in Dumfriesshire (Gaelic: Siorrachd Dhùn Phris), a Southern area, bordering on England that today forms part of the Dumfries and Galloway Council Area. The family came "from the lands of Dalgarnock in Dumfriesshire. The old family of Dalgarno of that Ilk, however, were in Aberdeenshire. In 1262 William de Dalgarnoc, rector of Rathen in the diocese of St. Andrews, had a dispensation to hold the church of Aberbrothoc then held by him in commendam. William de Dalgernok, preceptor of David II, was abbot of Kelso, 1329." [1]

Early History of the Dilgarnough family

Notable amongst the family at this time was George Dalgarno (c.1626-1687), an educationalist, born in Old Aberdeen. He studied at Marischal College and kept school for thirty years. He was the author of Didascalocophus or the Deaf and Dumb man's tutor (1680), which proposed a totally new linguistic system for use by deaf mutes. The system is still used in the United States. "According to...
Another 65 words (5 lines of text) are included under the topic Early Dilgarnough Notables in all our PDF Extended History products and printed products wherever possible.

Migration of the Dilgarnough family