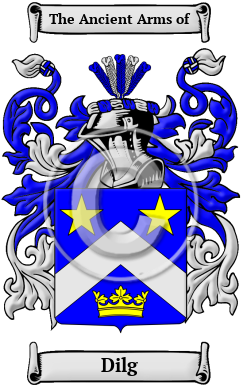 The surname Dilg is derived from the personal name Odilia, the patron saint of the Alsace. Odilia was shortened into the diminutive form Dilia, and then it was shortened again to Dilg. There is a double diminutive form and the suffix "er" was sometimes added to the name. Patronymic surnames, such as Dilg, arose out of the vernacular and religious given name traditions. In the religious naming tradition, which was developed later than the vernacular tradition, surnames were bestowed in honor of religious figures or church officials. In Europe, theChristian Church was one of the most powerful influences on the formation of given names. Personal names derived from the names of saints, apostles, biblical figures, and missionaries are widespread in most European countries. In the Middle Ages, they became increasingly popular because people believed that the souls of the deceased continued to be involved in this world. They named their children after saints in the hope that the child would be blessed or protected by the saint.

Early Origins of the Dilg family

The surname Dilg was first found in Swabia, where this family name became a prominent contributor to the development of the district from ancient times. Always prominent in social affairs, the name became an integral part of that turbulent region as it emerged to form alliances with other families within the Feudal System and the nation. The name comes from Odilia, patron saint of the Alsace, and it soon took the form of Dilia, and thence Dilg. Records reveal that a Mathis Dilger lived in Tuebingen in 1456.

Early History of the Dilg family

This web page shows only a small excerpt of our Dilg research. Another 106 words (8 lines of text) covering the years 1771 and 1818 are included under the topic Early Dilg History in all our PDF Extended History products and printed products wherever possible.

Spelling variations of this family name include: Dilg, Dilger, Dilge, Tilgner (Silesia) and others.

More information is included under the topic Early Dilg Notables in all our PDF Extended History products and printed products wherever possible.

Dilg migration to the United States +

Dilg Settlers in United States in the 19th Century