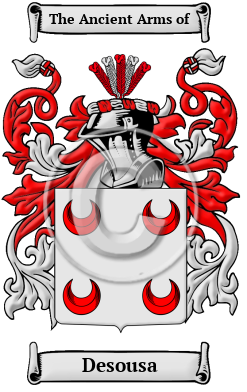 The distinguished surname Desousa comes from Spain, a country rich in culture and history. The earliest forms of hereditary surnames in Spain were the patronymic surnames, which are derived from the father's given name, and metronymic surnames, which are derived from the mother's given name. The Spanish surname Desousa is the Castillian form of the Galician and Portuguese surname Souza or Sousa.

Early Origins of the Desousa family

The surname Desousa was first found in Galicia, in northwestern Spain.

Early History of the Desousa family

This web page shows only a small excerpt of our Desousa research. Another 331 words (24 lines of text) covering the years 1037, 1139, and 1391 are included under the topic Early Desousa History in all our PDF Extended History products and printed products wherever possible.

Another 37 words (3 lines of text) are included under the topic Early Desousa Notables in all our PDF Extended History products and printed products wherever possible.

Migration of the Desousa family