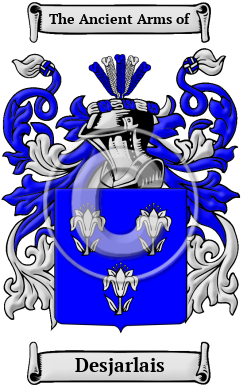 The name Desjarlais was formed many centuries ago in France during the Dark Ages in that northern western region known as Brittany (French: Bretagne). [1] It was a name typically given to a vegetable gardener. It translates as, "of the gardens," and was originally given to the person in charge of growing edible produce.

Early Origins of the Desjarlais family

The surname Desjarlais was first found in Brittany, where this distinguished family first established itself as one of the most prestigious families of the region.

From this acclaimed family came many Lords of Bretagne and after branching to Bourgogne in 1500, the members of this noble family also became Lords in Normandy. By 1533, members of the renowned Desjardins family had spread and prospered as far as Livet in Grenoble.

Louis Isnar Desjardins, 1814-1894, a French engraver, was famous for inventing chromo typography. Felix Desjardins was known for his talents as a naturalist, along with Albert Desjardin, a noted French engineer.

Claude Des Jardins, born in 1649, son of Marin and Marguerite (née Gabrielle), travelled from France to the New World in the 17th century. He married Marguerite Cardillon, born in 1651, daughter of Noel and Marie (née Dubois), in Quebec on 12th January 1666. [2]

Early History of the Desjarlais family

This web page shows only a small excerpt of our Desjarlais research. Another 57 words (4 lines of text) covering the years 1631, 1683, 1637 and 1694 are included under the topic Early Desjarlais History in all our PDF Extended History products and printed products wherever possible.

One can encounter great variation in the spelling of French surnames; in part, as spelling, and the spelling names was not yet standardized during the early development of the written French language. Later, there was much branching and movement of families, and spellings would change according to region. Variations of the name Desjarlais include Desjardin, Desjardins, DesJardin, DesJardins, Des Jardins, Desjardines, DesJardines, Déjardin, Déjardins, Dujardin, DuJardin, Desjardains, Desjardain, Déjardain, DéJardien, Déjerdin, Desjerdin, Desjerdins, Déjerdins, Déjerdain, Déjerdains, Le Jardin, Les Jardins, Lesjardins, Jardin, Jardines, Desjerdin and many more.

Another 40 words (3 lines of text) are included under the topic Early Desjarlais Notables in all our PDF Extended History products and printed products wherever possible.

Migration of the Desjarlais family

Immigration to New France was slow; therefore, early marriage was desperately encouraged amongst the immigrants. The fur trade attracted migrants, both noble and commoner. 15,000 explorers left Montreal in the late 17th and 18th centuries. By 1675, there were 7000 French in Quebec. By the same year the Acadian presence in Nova Scotia, New Brunswick and Prince Edward Island had reached 500. In 1755, 10,000 French Acadians refused to take an oath of allegiance to England and were deported to Louisiana. The French founded Lower Canada, thus becoming one of the two great founding nations of Canada. The distinguished family name Desjarlais has made significant contributions to the culture, arts, sciences and religion of France and New France. Amongst the settlers in North America with this distinguished name Desjarlais were Michel Desjardins, who arrived in Montreal, Quebec in 1653; Claude Desjardin, who arrived in Canada in 1665; John Desjardins, who settled in Maryland in 1666.