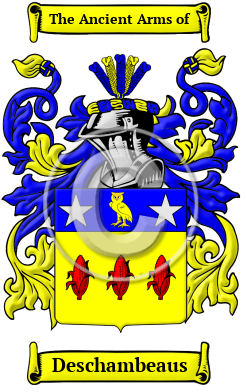 The majestic region of Picardy in France was the place of origin of the prestigious surname Deschambeaus. Deschambeaus is a topographic surname, which is a form of hereditary surname, and was given to a person who resided near a physical feature such as a hill, stream, church, or type of tree. The surname Deschambeaus is derived from the Old French word "champ," which means field, and literally means "of the fields."

Early Origins of the Deschambeaus family

The surname Deschambeaus was first found in Picardy (French: Picardie) in northern France, where the family was first established, and expanded to become one of the more notable names in the region.

Early History of the Deschambeaus family

Notable amongst the family name at this period was Samuel de Champlain, born in Saintonge in 1567, who was sent to the New World by King Henry IV, discovered Canada, then known as "la Nouvelle-France", and founded Quebec City in 1608; Eustache Deschamps (1340-1406), medieval French poet, received lessons in versification from Guillaume de Machaut and later studied law at Orleans University, traveled through Europe as a diplomatic messenger for Charles V, His estate was pillaged by the English, in consequence of which he continuously abuses them in his many poems, wrote as many as 1,175 ballades, and he is sometimes...
Another 114 words (8 lines of text) are included under the topic Early Deschambeaus Notables in all our PDF Extended History products and printed products wherever possible.

Migration of the Deschambeaus family

Some of the first settlers of this family name or some of its variants were: Issac Broussard DesChamps, who settled in New York in 1668; Philippe Deschamps, 45; who settled in Louisiana in 1719 with his wife Claudine; Deschamps, 40.