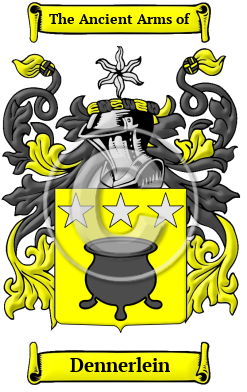 Early Origins of the Dennerlein family

The surname Dennerlein was first found in Bavaria, where the name was closely identified in early medieval times with the feudal society which would become prominent throughout European history. The name would later emerge as a noble family with great influence, having many distinguished branches, and become noted for its involvement in social, economic and political affairs. Like many surnames, the name Dennerlein began as a personal name and was later adopted as a surname. It is a shortened form of the Germanic personal name Deinhard, which is made up of the words "degen," meaning "warrior or hero" and "hard," meaning "brave or strong."

Early History of the Dennerlein family

Spelling variations of this family name include: Dahn, Dahne, Dehn, Dehne and others.

Prominent among members of the name Dennerlein in this period include David Denicke (1603-1680), a German jurist and hymn writer. Siegfried Wilhelm Dehn was a "musical writer, born at Altona 1796 [App. p.610 "Feb. 25, 1799"], died at Berlin 1858 [App. p.610 "April 21"]. His studies at the University of Leipsic were interrupted in 1813 by having to join the army against the French. On the restoration of peace he went to Plön and Leipsic, and in 1823 to Berlin, where he studied under Bernhard Klein in harmony and composition. He possessed strong literary tastes...
Another 95 words (7 lines of text) are included under the topic Early Dennerlein Notables in all our PDF Extended History products and printed products wherever possible.

Dennerlein migration to the United States +

Dennerlein Settlers in United States in the 19th Century