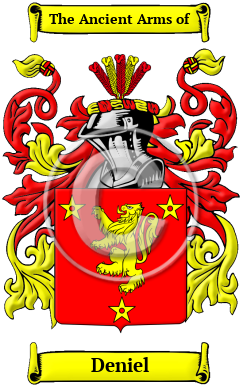 The prestigious surname Deniel originated in the beautiful and majestic region of Poitou in France. France was notorious for its eccentric kings, but it was revered for its contributions to European art and culture. The surname Deniel originally came from the region of Poitou. It is a topographical name, which is a type of hereditary surname. Topographical surnames were taken from physical features or landmarks that the family lived near.

Early Origins of the Deniel family

The surname Deniel was first found in Poitou, where early members of the lineage have been cited since the twelfth century, such as Guillaume Daniel, a knight recorded in 1155. Another Daniel, known only as Master, was Chaplain of the French Empire in 1186. Leonard Daniel was alderman of Poitiers in 1355. Many individuals with the name Daniel are cited around 1335 in Normandy: of Boisdemets, Pernay, Vauguion. Lambert Daneau was honoured with noble status in 1428, studied law, and received his doctor of law. [1]

Early History of the Deniel family

This web page shows only a small excerpt of our Deniel research. More information is included under the topic Early Deniel History in all our PDF Extended History products and printed products wherever possible.

Notable amongst the family at this time was Pierre Danès, who was named curator of Saint-Josse in Paris in 1523 and was known as one of the most brilliant humanists of his time. Charles Daniel was a famous Marine in Dieppe in 1592; Saint Antoine Daniel was a Jesuit in Dieppe in 1601; Catherine Daniélou was a mystic in Quimper in 1619; Gabriel Daniel was a Jesuit in Rouen in 1649; Pierre Danet was...
Another 73 words (5 lines of text) are included under the topic Early Deniel Notables in all our PDF Extended History products and printed products wherever possible.

Migration of the Deniel family

Some of the first settlers of this family name or some of its variants were: 300 individuals of the lineage who arrived from France onto Canadian shores between 1600 and 1900. Among these, Jacques Daniau was married in 1683 in Trois-Riviè.