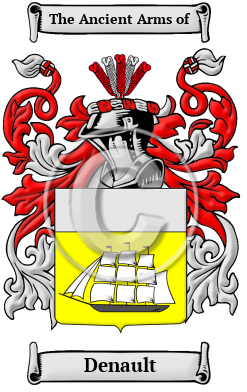 Early Origins of the Denault family

The surname Denault was first found in Champagne, where early members of the lineage first settled. The name can also be traced to the île-de-France.

Pierre Naud, son of Jean and Marie (née Martin) of Saintonge, was a French soldier that settled in Canada in the 17th century. He married Marie-Thérèse Garant, born on 29th July 1672, daughter of Pierre and Renée (née Chamfrin), in 1692. He married again at Saint-Michel, Quebec to Marie-Jeanne Gaboury, daughter of Louis and Nicole (née Soulard), on 20th April 1716. [1]

Early History of the Denault family

This web page shows only a small excerpt of our Denault research. More information is included under the topic Early Denault History in all our PDF Extended History products and printed products wherever possible.

Notable amongst the family during this period was Gabriel Naudé, a famous bibliographer who was considered to be one of the most educated men of his time. Born in Paris in 1600, he became a successful philosopher and developed a passion for medicine. Philippe Naudé, born in Metz in 1654, was a mathematician and theologian; Philippe Naudé, son of the former, was also a mathematician in Metz. Denis Nault was a literary hack and a judge in Luzy, a town near Nevers, and in Toulon-sur-Arroux, in the bailiwick of Montcenis, during the...
Another 92 words (7 lines of text) are included under the topic Early Denault Notables in all our PDF Extended History products and printed products wherever possible.

In the United States, the name Denault is the 16,196th most popular surname with an estimated 2,487 people with that name. [2]

Denault Settlers in Canada in the 17th Century

Denault Settlers in Canada in the 18th Century

Historic Events for the Denault family +