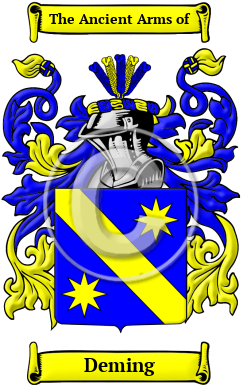 Early Origins of the Deming family

The surname Deming was first found in at the foundations of Venice (Italian: Venezia), with the Minotto family.

Early History of the Deming family

This web page shows only a small excerpt of our Deming research. More information is included under the topic Early Deming History in all our PDF Extended History products and printed products wherever possible.

Prominent among members of the family was Rosso Misotti, leader of the Ghibeline faction in Ferrara in 1203. Members of the Venetian Minotto family were brave soldiers: in 1265 Tommaso Minotto led the army against the Genoese forces; and in 1300 Marco Minotto was General of 37 ships which fought against the Greeks; Alessandro Minuziano was an editor and printer in Puglia in 1450 who printed the first edition of the collected works of Cicero; Giacomo Menochio was a prominent jurist...
Another 81 words (6 lines of text) are included under the topic Early Deming Notables in all our PDF Extended History products and printed products wherever possible.

In the United States, the name Deming is the 6,043rd most popular surname with an estimated 4,974 people with that name. [1]

Deming migration to the United States +

Immigrants bearing the name Deming or a variant listed above include:

Deming Settlers in United States in the 17th Century

Deming Settlers in United States in the 19th Century

Deming Settlers in United States in the 20th Century

Deming Settlers in Australia in the 19th Century