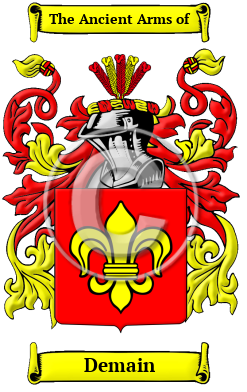 Early Origins of the Demain family

The surname Demain was first found in Maine.

Early History of the Demain family

Spelling variations of this family name include: Dumaine, Du Maine and others.

Notable amongst the family at this time was Guillaume Du Maine, born in the sixteenth century, who chose a religious life and became abbey of Beaulieu. Antoine Du Maine was Baron of Bourg and belonged to the most ancient family of the fourteenth century. In 1608 he was named Governor of Bourg and of the castle of Antibes. Louis-François Dumaine, son of a farmer, was born in Lieusaint in 1831 and at the age of 12 went to school to apprentice with a haberdasher. Lucien-Victor Dumaine, born in 1842 in Tinchebray...
Another 90 words (6 lines of text) are included under the topic Early Demain Notables in all our PDF Extended History products and printed products wherever possible.

Migration of the Demain family

Some of the first settlers of this family name or some of its variants were: many individuals of the lineage who arrived from France onto Canadian shores between 1600 and 1900. Records show that François Dumaine was married in 1717 in Longeuil, Quebec.