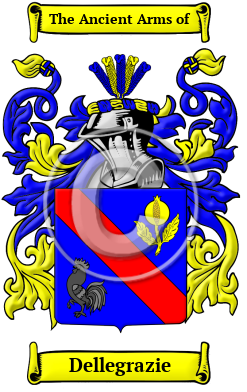 The distinguished surname Dellegrazie originated in an area of Italy, known as the Papal States. Although people were originally known only by a single name, it became necessary for people to adapt a second name to identify themselves as populations grew and travel became more frequent. The process of adopting fixed hereditary surnames was not complete until the modern era, but the use of hereditary family names in Italy began in the 10th and 11th centuries. Italian hereditary surnames were developed according to fairly general principles and they are characterized by a profusion of derivatives coined from given names. Although the most traditional type of family name found in the region of the Papal States is the patronymic surname, which is derived from the father's given name, the nickname type of surname is also frequently found. Nickname surnames were derived from an eke-name, or added name. They usually reflected the physical characteristics or attributes of the first person that used the name. The surname Dellegrazie came from the personal name Grazia. The name is originally Latin from the name Gratius. The name Gratius was originally derived from the word gratus, which means dear, beloved.

Early Origins of the Dellegrazie family

The surname Dellegrazie was first found in the region of Umbria, in the ancient city of Perugia, well known today for the large number of foreign students at its University. Records are found dating to 1232, when Giacomo Graziani was made General Captain of the Florentine Republic and was forced to go against the Sienese forces.

Early History of the Dellegrazie family

This web page shows only a small excerpt of our Dellegrazie research. More information is included under the topic Early Dellegrazie History in all our PDF Extended History products and printed products wherever possible.

Enormous variation in spelling and form characterizes those Italian names that originated in the medieval era. This is caused by two main factors: regional tradition, and inaccuracies in the recording process. Before the last few hundred years, scribes spelled names according to their sounds. Spelling variations were the unsurprising result. The variations of Dellegrazie include Grazia, Grazi, Grazzi, Di Grazia, Delle Grazie, Grazzini, Grazioli, Graziotti, Graziosi, Grazioso, Graziuso, Graziussi and many more.

Prominent among members of the family was Francesco Graziani, Bishop of Perugia in 1339; Antonio Francesco Grazzini, a Florentine poet and dramatist born in 1503. He came from an honorable and ancient family and among his most famous works was "Le Cene," a collection of 22 tales told by 5 youths and 5 maidens during 3 days of carnival; Bonifazio Graziani, a famous composer of church music during the early 17th century in Marino; Baltasar Gracian y Morales (1601-1658), a Spanish Jesuit and...
Another 83 words (6 lines of text) are included under the topic Early Dellegrazie Notables in all our PDF Extended History products and printed products wherever possible.

Migration of the Dellegrazie family

Immigrants bearing the name Dellegrazie or a variant listed above include: Francisco Graziani, who applied for Naturalization in Allegheny County, PA in 1876, Salvatore Grazianno, who was Naturalized in Illinois between 1873-1896, and Francesco Graziano, who was recorded in a passenger list as arriving in New York in 1893..