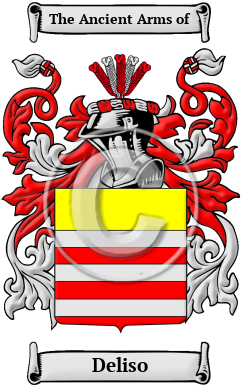 Early Origins of the Deliso family

The surname Deliso was first found in Venice (Italian: Venezia), and seaport occupying one of the most remarkable sites of the world. Centralizing on the Grand Canal the history of the city can be traced through the different styles of architecture Byzantine, Gothic, early Renaissance and late Renaissance. It is rich in ancient palaces, churches, libraries, galleries, monuments, statues, treasures and artifacts. Its history is abundant in politics, art, religion, scholarship and conflict. The ducal palace was commenced in 1309. In those ancient times only persons of rank, the podesta, clergy, city officials, army officers, artists, landowners were entered into the records. To be recorded at this time, at the beginning of recorded history, was of itself a great distinction and indicative of noble ancestry.

Early History of the Deliso family

This web page shows only a small excerpt of our Deliso research. Another 92 words (7 lines of text) covering the year 1348 is included under the topic Early Deliso History in all our PDF Extended History products and printed products wherever possible.

More information is included under the topic Early Deliso Notables in all our PDF Extended History products and printed products wherever possible.

Migration of the Deliso family

Some of the first settlers of this family name or some of its variants were: Mary Lisco, who settled in Vermont sometime between 1793 and 1873; Joseph Lisi, who came to New York in 1906; and Ameszka Lissi, who settled in Illinois in 1943..