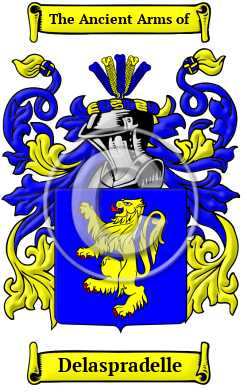 Early Origins of the Delaspradelle family

The surname Delaspradelle was first found in Champagne, but one of the earliest records of the name was Pierre Desprès (1288-1361), a French Cardinal during the period of Avignon Papacy. He was son of Raymond II Desprès, seigneur of Montpezat. He was bishop of Riez in 1318 and Archbishop of Aix (1318-1320.)

Early History of the Delaspradelle family

Notable amongst the family during this period was Josquin Despres (1440-1521) a Flemish composer; Francisco Desprats (1454-1504), a Spanish Roman Catholic bishop and cardinal; Nicholas-Michel Desprès, a prominent doctor in Caen in the sixteenth century; Jean-François Despréaux, a flutist and opera singer in 1693; Antoine Desprès, an accomplished goldsmith; Joseph-Grellet Desprades was vicar-general of Die in 1733; Louis-Jean Desprez was a famous architect in Auxerre in 1742; Jean-Baptiste-Denis Desprès was a man of letters and a political journalist in Dijon in 1752; Jean-Etienne Despréaux was a dancer, violinist and entered into the opera...
Another 92 words (7 lines of text) are included under the topic Early Delaspradelle Notables in all our PDF Extended History products and printed products wherever possible.

Migration of the Delaspradelle family