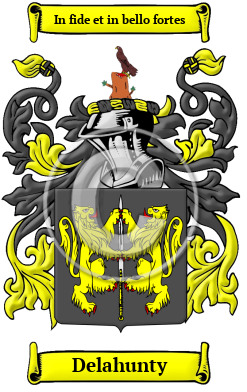 In its ancient Gaelic form, the Irish name Delahunty was written O Dulchaointigh, which comes from the word dulchaointeach, which refers to a satirist. The ancestor of this Irish family is said to have been Muintir Cormac or Muintir Dulchonta, which was gradually anglicized over the years, until it was rendered as Delahunt or Delahunty. Although the name appears quite French, it seems highly unlikely that there are any French origins to the name, other than the Norman influence of the clerks, who began processing Irish names, as early as the 12th century.

Early Origins of the Delahunty family

The surname Delahunty was first found in Ormond, where records of the name can be found in deeds from around 1441 on. Petty's "census" of 1659 showed bearers of Delahunty in counties Offaly (King's county) and Kilkenny. The ancient and important Delahunty sept sometimes claims descent from the O'Hara Buidhe, Chiefs of Leyney in County Sligo, through Lughaidh.

Early History of the Delahunty family

This web page shows only a small excerpt of our Delahunty research. Another 69 words (5 lines of text) covering the years 1670 and 1735 are included under the topic Early Delahunty History in all our PDF Extended History products and printed products wherever possible.

One explanation for the many variations is that scribes and church officials frequently spelled the name as it sounded: an imprecise method at best. Understandably then, various spellings of the surname Delahunty were found in the many archives researched. These included Delahunt, Delahunty, DeLahunte, DeLaHunty, De-la-Hunt, Delahunt and many more.

More information is included under the topic Early Delahunty Notables in all our PDF Extended History products and printed products wherever possible.

Delahunty migration to the United States +

Irish immigrants began to leave the English-controlled Ireland in sizable numbers during the late 18th century. Many of these Irish immigrated to British North America or the United States in the hopes of gaining their own tract of farmland. This pattern of migration grew steadily until the 1840s when the Great Potato Famine caused a great exodus of immigrants to North America. These immigrants differed from their predecessors in that they were desperately fleeing the disease and starvation that plagued their homeland, and many were entirely destitute when they arrived in North America. Although these penniless immigrants were not warmly welcomed when they arrived, they were critical to the rapid development of the United States and what would become known as Canada. Many went to populate the western frontiers and others provided the cheap labor the new manufacturing sector and the building of bridges, roads, railways, and canals required. A thorough examination of immigration and passenger lists has revealed some of the earliest people to arrive in North America with name Delahunty or one of its variants:

Delahunty Settlers in United States in the 18th Century

Delahunty Settlers in United States in the 19th Century

Delahunty Settlers in Australia in the 19th Century

Delahunty Settlers in New Zealand in the 19th Century

Historic Events for the Delahunty family +