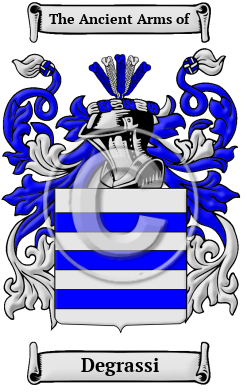 From the historical and fascinating Italian region of Venice emerged a multitude of noble families, including the distinguished Degrassi family. Although people were originally known only by a single name, it became necessary for people to adapt a second name to identify themselves as populations grew and travel became more frequent. The process of adopting fixed hereditary surnames was not complete until the modern era, but the use of hereditary family names in Italy began in the 10th and 11th centuries. Italian hereditary surnames were developed according to fairly general principles and they are characterized by a profusion of derivatives coined from given names. Although the most common type of family name found in the region of Venice is the patronymic surname, which is derived from the father's given name, the nickname type of surname is also frequently found. Nickname surnames were derived from an eke-name, or added name. They usually reflected the physical characteristics or attributes of the first person that used the name. The surname Degrassi came from a person who was corpulent or stout. The surname Grassi is derived from the word grasso, which means overweight.

Early Origins of the Degrassi family

The surname Degrassi was first found in the city of Milan, in the region of Lombardy

Early History of the Degrassi family

This web page shows only a small excerpt of our Degrassi research. More information is included under the topic Early Degrassi History in all our PDF Extended History products and printed products wherever possible.

Italian surnames have a surprising number of forms in comparison with other European surnames because they reflect the regional variations and the many dialects of the Italian language, each of which has its distinctive features. For example, in Northern Italy the most standard Italian surname suffix is "I", whereas in Southern Italy the most typical surname suffix is "O". Sardinian is very different from other forms of Italian and in fact, it is considered to be its own distinct language. Additionally, spelling changes frequently occurred because medieval scribes, church officials, and the bearers of names, spelled names as they sounded rather than according to any specific spelling rules. As a consequence of the major changes in the Italian language and in the local spellings of Italian surnames that occurred over the course of history, there are numerous variations for the surname Degrassi. These spelling variations include Grassi, Grasso, De Grassi, Degrassi, Lo Grasso, La Grassa, Grasselli, Grassellini, Grassaleoni, Grassilli, Grassigli, Grassetti, Grassini, Grassani and many more.

Prominent among bearers of this family in early times was Giovannino De Grassi, an architect, sculptor, and miniaturist from Lombardy who helped to engineer the Milan Cathedral in the early 15th century. Nascimbene Grassaleoni of Ferrara became mayor of Sassuolo in 1418; Uguccione Grassaleoni was a lawyer and then Judge of the Commune of Ferrara in 1459. Carlo Grassi (1520-1571) was an Italian Roman Catholic bishop and cardinal. Giacomo di Grassi was an Italian fencing master who wrote the fencing treatise Ragione di adoprar sicuramente l'Arme, si...
Another 86 words (6 lines of text) are included under the topic Early Degrassi Notables in all our PDF Extended History products and printed products wherever possible.

Migration of the Degrassi family

Degrassis were some of the first of the immigrants to arrive in North America: John Grassi, who arrived in Baltimore, Maryland, in 1810 at the age of 35; Agostino Grasselli, aged 39, who arrived at Ellis Island from Saimano, Italy, in 1912.