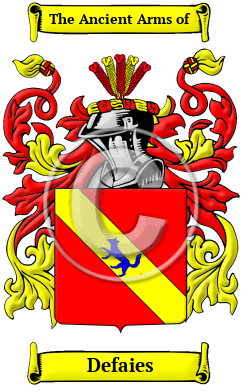 The region of ancient France known as Auvergne, is where the name Defaies was born. Defaies was a name for someone who lived near a grove of beech trees. It is associated with the Auvergne region of France, on the Massíf Central, which is located in south-central France.

Early Origins of the Defaies family

The surname Defaies was first found in Auvergne, a historic province located in south-central France.

Early History of the Defaies family

Throughout the course of history most surnames have undergone changes for many reasons. During the early development of the French language, a son and father may not have chosen to spell their name the same way. Many are simple spelling changes by a person who gave his name, phonetically, to a scribe, priest, or recorder. Many names held prefixes or suffixes which became optional as they passed through the centuries, or were adopted by different branches to signify either a political or religious adherence. Hence, we have many spelling variations of this name, Defaies some of which are Fay, Fait, Fais, Faie, Faite, Faies, Fez, Fée, Faye, De Fay, De Fait, De Fais, De Faie, De Faies, De Fez, De Fée, De Fé, Fé, De Faye and many more.

Notable amongst the family was Claude-Florimond De Fay, Captain of the Ponthieu Regiment during the 1700's. Jacques de la Faye was a 17th-18th century French writer whose Defensio Religionis ('Defense of Religion') a 251-page critique of the pantheism of John Toland, was...
Another 40 words (3 lines of text) are included under the topic Early Defaies Notables in all our PDF Extended History products and printed products wherever possible.

Migration of the Defaies family