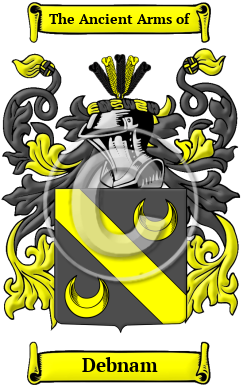 Early Origins of the Debnam family

The surname Debnam was first found in Suffolk at Debenham, a large village and civil parish in the Mid Suffolk district that dates back to the Domesday Book of 1086 where it was listed as Depbenham. [1] The place name literally means "homestead or village by the deep river," from the Old English words "deope" + "ham." [2] Another reference claims the place name derives its name from its situation on the river Deben, which rises at some distance above the town. The kings of the East Angles are said to have held their courts at Debenham, where they had a palace. Originally a market town, Debenham was originally in the union of Bosmere and Claydon, hundred of Thredling and was held by William de Gulafra from Robert Malet who was recorded in the Domesday Book. At that time, Debenham consisted of two churches, St. Mary and St. Andrew and held twenty pigs and twenty eight goats and was noted for it's Norman church.

Early History of the Debnam family

Another 41 words (3 lines of text) are included under the topic Early Debnam Notables in all our PDF Extended History products and printed products wherever possible.

In the United States, the name Debnam is the 17,393rd most popular surname with an estimated 2,487 people with that name. [3]

Debnam migration to the United States +

Debnam Settlers in United States in the 17th Century