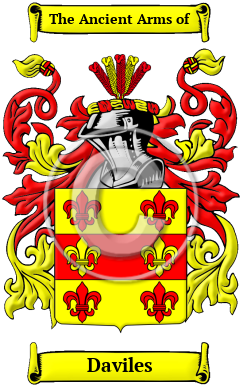 Early Origins of the Daviles family

The surname Daviles was first found in Northumberland in the township of North Dissington in Northumberland. "This place was formerly the property and residence of a junior branch of the Delaval family, of whom Admiral Sir Ralph Delaval, a native of the township, sold the estate to Mr. Collingwood, of Byker." [1]

"At Low Horton [in Northumberland] stood the ancient manor-house, or castle, belonging to the Delaval family, which was strongly fortified by licence in 1293, and surrounded by a double moat and rampart of earth; the greater part of the foundation was razed, and the intrenchment levelled, in 1809." [1]

Early History of the Daviles family

Another 49 words (4 lines of text) are included under the topic Early Daviles Notables in all our PDF Extended History products and printed products wherever possible.

Migration of the Daviles family