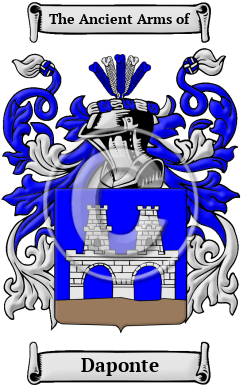 The Daponte surname was taken on from any of the many place names in Italy called Ponte, or from places derived from the Italian word "ponte," which means "bridge." Local names are derived from a place-name where the original bearer once resided or held land. Often Italian local surnames bore the prefix "di," which signifies emigration from one place to another, but does not necessarily denote nobility.

Early Origins of the Daponte family

The surname Daponte was first found in Emilia-Romagna. Although this name arose independently in various parts of Italy, the first recorded instances of the name found are of the Ponte di Venezi family, ennobled in 1297, who are said to be originally of Ferrara. There are more than fourteen municipalities and parishes found in Italy today.

Early History of the Daponte family

Prominent among members of the family was Giovanni dal Ponte (1385-c.1438), Italian, Florentine painter; as well as Giovanni Pontano, a 15th century humanist, poet, and diplomat from Cerreto who served three Kings of Naples. Piero del Ponte (1462-1535) was the 45th Grand Master of the Order of Saint John between 1534 and 1535. He hailed from Asti, in northern Italy and was a descendant of the...
Another 64 words (5 lines of text) are included under the topic Early Daponte Notables in all our PDF Extended History products and printed products wherever possible.

Daponte migration to the United States +

Daponte Settlers in United States in the 19th Century