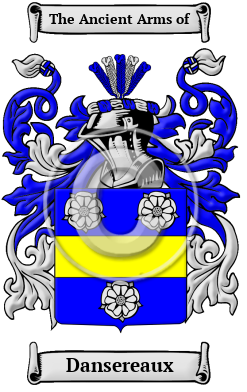 Early Origins of the Dansereaux family

The surname Dansereaux was first found in Ile-de-France.

Early History of the Dansereaux family

This web page shows only a small excerpt of our Dansereaux research. More information is included under the topic Early Dansereaux History in all our PDF Extended History products and printed products wherever possible.

Spelling variations of this family name include: Dansereau, Danse, Dansette, Danset, Dansette and many more.

Notable amongst the family was Simon Flessingue Dansa, a mariner who settled in Marseille at the beginning of the seventeenth century and became a merchant off the Mediterranean Sea. In 1606 he went to Algeria and lived with a tribe. Jean-Charles-Gabriel Danse was a politician in Beauvais in 1788. He became auditor-councilor at the court of Amiens and was a judge in the civil court...
Another 65 words (5 lines of text) are included under the topic Early Dansereaux Notables in all our PDF Extended History products and printed products wherever possible.

Migration of the Dansereaux family

Some of the first settlers of this family name or some of its variants were: 200 individuals of the lineage who arrived from France onto Canadian shores between 1600 and 1900. Although most settlers arrived during the nineteenth century, some came earlier, such as Pierre Dansereau, who married in 1708 in Varennes, Quebec.