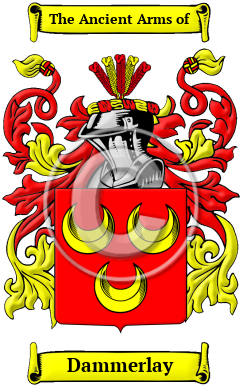 Early Origins of the Dammerlay family

The surname Dammerlay was first found in Devon at Milton Damerell, a parish, in the union of Holsworthy, hundred of Black Torrington. [1]

"Milton" was frequently used in ancient days as it meant "middle farmstead or estate." [2] The parish dates back to the Domesday Book of 1086 when it was first listed as Mideltone but by 1301 it was listed as Middleton Aubermarle for these were lands originally held by Robert d'Aubermarle (Robert de Alba Marula) in 1086. [3] [4] At that time, the holding was worth 30 cattle and 25 goats.

"Damerell is said to be a corruption of D'Albemarle, the name of an ancient family owning the manor of Milton, in Marytavy, from the 11th to the 13th century, from whom the parishes of Milton Damerel and Stoke Damerel, in part derived their names." [5]

The manor of "Flete, [in the parish of Modbury, Devon] the most important estate in the parish, continued in the Damerells from the Conquest till the reign of Edward III." [6]

Early English rolls provide us a glimpse of the spelling variations used through Medieval times. By example, Reginald de Aumarle was listed in the Assize Rolls of Somerset in 1243; and Bernullus de Aumeryl was found in Lancashire in the 13th century. "From Aumale (Seine-Inférieure), earlier Alba Margila [in Normandy]. The fuller form is preserved in the title of the Duke of Albemarle. Hinton Admiral (Hants) preserves the surname without the preposition." [4]

Indeed Hinton Admiral is a "chapelry, in the parish, union, and hundred of Christchurch, Ringwood and S. divisions of the county of Southampton." [1]

Early History of the Dammerlay family

This web page shows only a small excerpt of our Dammerlay research. Another 101 words (7 lines of text) covering the years 1243 and 1568 are included under the topic Early Dammerlay History in all our PDF Extended History products and printed products wherever possible.

More information is included under the topic Early Dammerlay Notables in all our PDF Extended History products and printed products wherever possible.

Migration of the Dammerlay family