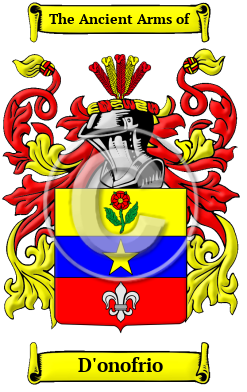 The D'onofrio surname comes from the Italian personal name Onofrio, which is derived from the Latin Onnuphrius. It became a popular Christian name, mainly in Southern Italy due to St. Onofrio, a 5th-century Egyptian martyr.

Early Origins of the D'onofrio family

The surname D'onofrio was first found in Emilia. In those ancient times only persons of rank, the podesta, clergy, city officials, army officers, artists, landowners were entered into the records. To be recorded at this time, was in itself a family honor.

Early History of the D'onofrio family

This web page shows only a small excerpt of our D'onofrio research. Another 115 words (8 lines of text) are included under the topic Early D'onofrio History in all our PDF Extended History products and printed products wherever possible.

Spelling variations of this family name include: D'Onofrio, D'Onofri, Nofri, Noferi, Noferini, Onofrio and many more.

More information is included under the topic Early D'onofrio Notables in all our PDF Extended History products and printed products wherever possible.

In the United States, the name D'onofrio is the 6,766th most popular surname with an estimated 4,974 people with that name. [1]

D'onofrio migration to the United States +

D'onofrio Settlers in United States in the 20th Century