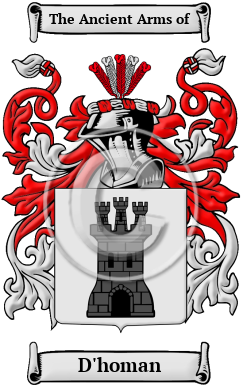 The D'homan surname is derived from the Latin given name "Damianus," which in turn comes from the name of a Greek goddess, Damia. There was an early Christian saint named Damian, martyred in Cilicia in the year 303, under emperor Domitian. There was also a St. Damian, who lived in the 7th-8th centuries recorded as the Bishop of Pavia. These two saints, no doubt have contributed the popularity of this name.

Early Origins of the D'homan family

The surname D'homan was first found in Piedmont (Italian: Piemonte, Piedmontese and Occitan: Piemont), a territorial division of northern Italy at the foot of the Alps consisting of the provinces of Alessandria, Cuneo, Novara and Turin. Saint Peter Damian "Pietro Damiani," in Italian (circa 1007-1072) was an Italian religious reformer, who was a Camaldolese monk at Fonte-Avellino (near Gubbio).

Early History of the D'homan family

This web page shows only a small excerpt of our D'homan research. Another 46 words (3 lines of text) covering the years 146 and 1460 are included under the topic Early D'homan History in all our PDF Extended History products and printed products wherever possible.

More information is included under the topic Early D'homan Notables in all our PDF Extended History products and printed products wherever possible.

Migration of the D'homan family

Some of the first settlers of this family name or some of its variants were: Thomas Domini, who settled in America in 1768; Francis Daymon, who came to Pennsylvania in 1777; Daniel Damont, who settled in Philadelphia in 1818; Georg Anton Domino, who arrived in Texas in 1845.