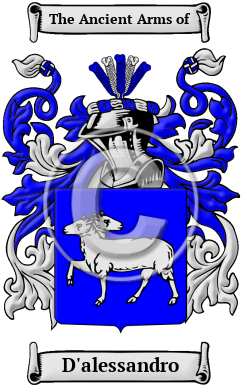 People in Italy were originally known only by a single name, but it became necessary for people to adopt a second name, or surname to identify themselves as populations grew and travel became more frequent. The process of adopting fixed hereditary surnames in Italy began in the 10th and 11th centuries. The surname D'alessandro was derived from the Italian personal name Alessandro.

Early Origins of the D'alessandro family

The surname D'alessandro was first found in Florence (Italian: Firenze), originally the capital of Tuscany, then capital of the kingdom of Italy. On the River Arno there are numerous Florentine Churches, Museums, Galleries. It dates back to 313 A.D. The history is complex and turbulent. The de' Medici family are the notables. They were expelled in 1494 but they returned in 1512, out in 1527 and then returned. In those ancient times only persons of rank, the podesta, clergy, city officials, army officers, artists, landowners were entered into the records. To be recorded at this time, at the beginning of recorded history, was of itself a great distinction and indicative of noble ancestry.

Early History of the D'alessandro family

This web page shows only a small excerpt of our D'alessandro research. Another 110 words (8 lines of text) covering the years 1516, 1187, 1455, 1503 and 1657 are included under the topic Early D'alessandro History in all our PDF Extended History products and printed products wherever possible.

Another 33 words (2 lines of text) are included under the topic Early D'alessandro Notables in all our PDF Extended History products and printed products wherever possible.

In the United States, the name D'alessandro is the 7,684th most popular surname with an estimated 2,487 people with that name. [1]

D'alessandro migration to the United States +

D'alessandro Settlers in United States in the 20th Century

Historic Events for the D'alessandro family +