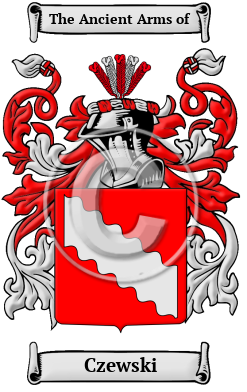 The Polish surname Czewski is derived from the Polish word "czyz," meaning "greenfinch," and as a surname it was most likely originally a nickname. Nickname surnames are those names which derive their origin from a physical characteristic or personal attribute of the initial bearer. The name may have been born by someone who kept birds or by someone who enjoyed singing. Alternatively, this name may be of house-name origin, that is, a name derived from the medieval practice of displaying a sign, engraving or picture over one's establishment (inn or tavern). The proprietor and his family were then identified by the particular sign that they displayed, which later become their hereditary family name.

Early Origins of the Czewski family

The surname Czewski was first found in the kingdom of Poland.

Early History of the Czewski family

This web page shows only a small excerpt of our Czewski research. Another 26 words (2 lines of text) covering the years 1590 and 1772 are included under the topic Early Czewski History in all our PDF Extended History products and printed products wherever possible.

Prominent among those of the name Czewski in this period were Mikolaj Czewski, Governor of Belzki, who was entrusted with the embassy in Stambulu in 1590; as well as a noble Polish family bearing the name Czeski, a sept of the great Clan Leliwa. The ancestral seat of this family...
Another 50 words (4 lines of text) are included under the topic Early Czewski Notables in all our PDF Extended History products and printed products wherever possible.

Migration of the Czewski family

Some of the first settlers of this family name or some of its variants were: Elisabeth Czeska, who came to Baltimore in 1862; Isidore Czeswinski, who was on record in the 1910 census of Maryland; Antonina Czeswinski, who arrived in Maryland between the years 1885 and 1910.