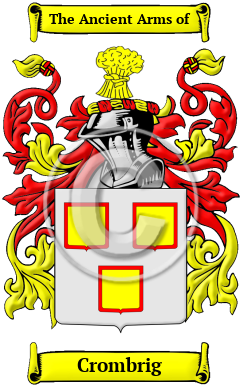 Early Origins of the Crombrig family

The surname Crombrig was first found in Kent at Groombridge, a village and chapelry, in the parish of Speldhurst, union of Tonbridge, hundred of Somerden. [1] The earliest record of the place was found in 1239 when it was listed as Gromenebregge. [2]

Groombridge Place is a moated manor house in the village of Groombridge which dates back to 1239 when the Lordship of Groomsbridge was granted. Later in 1560, William Grumbridge held estates near Staplehurst in that county. [3]

Early History of the Crombrig family

This web page shows only a small excerpt of our Crombrig research. Another 113 words (8 lines of text) covering the years 1484, 1677, 1455 and 1487 are included under the topic Early Crombrig History in all our PDF Extended History products and printed products wherever possible.

More information is included under the topic Early Crombrig Notables in all our PDF Extended History products and printed products wherever possible.

Migration of the Crombrig family