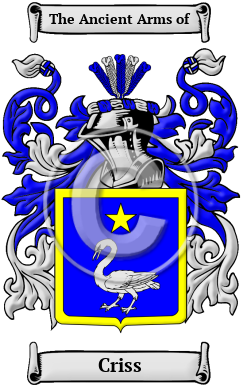 Early Origins of the Criss family

The surname Criss was first found in Austria, where the name became noted for its many branches in the region, each house acquiring a status and influence which was envied by the princes of the region. In their later history the name became a power unto themselves and were elevated to the ranks of nobility as they grew into this most influential family.

Early History of the Criss family

Spelling variations of this family name include: Christman, Christmann, Cristman, Cristmann and many more.

During this period prominent bearers of the name Criss were Jakob Christmann (1554-1613), a German Orientalist from Johannisberg (Rheingau), who also studied problems of astronomy. Franz Xavier Christmann was a secular priest, eminent organ-builder, date and place of birth unknown. He worked chiefly in Upper and Lower Austria and in Styria. His name first appears in connection with a monster organ at the monastery of St. Florian, near Linz, begun in 1770, but left unfinished in consequence of a quarrel with the provost. The fame of this organ spread far and wide, though it was not completed till 1837. He also...
Another 100 words (7 lines of text) are included under the topic Early Criss Notables in all our PDF Extended History products and printed products wherever possible.

In the United States, the name Criss is the 5,830th most popular surname with an estimated 4,974 people with that name. [1]

Criss migration to the United States +

Criss Settlers in United States in the 19th Century

Criss Settlers in United States in the 20th Century