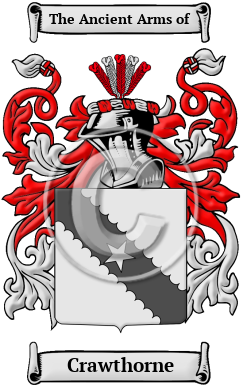 Early Origins of the Crawthorne family

The surname Crawthorne was first found in the North Riding of Yorkshire at Crathorne, a parish, in the union of Stokesley, W. division of the liberty of Langbaurgh. "This place, which is in the district called Cleveland, and situated on the western side of the vale of the river Leven, anciently belonged to the Crathorne family, who were settled here for many generations, and of whom Sir William Crathorne, Knt., died in the early part of the 14th century. The church is a small ancient structure, in the chancel of which is the recumbent effigy of a knight, supposed to be Sir William Crathorne. There is a Roman Catholic chapel, originally founded by the Crathorne family, and rebuilt about 1825." [1]

Early History of the Crawthorne family

This web page shows only a small excerpt of our Crawthorne research. Another 63 words (4 lines of text) covering the years 1345, 1509, 1670, 1740, 1670, 1739 and 1740 are included under the topic Early Crawthorne History in all our PDF Extended History products and printed products wherever possible.

Distinguished members of the family include William Crathorne (1670-1740), English Catholic divine, born in October 1670, descended from the ancient family of Crathorne of Crathorne in Yorkshire. He was educated in the English college at Douay, where he was a professor for several years. On...
Another 45 words (3 lines of text) are included under the topic Early Crawthorne Notables in all our PDF Extended History products and printed products wherever possible.

Crawthorne Settlers in Australia in the 18th Century