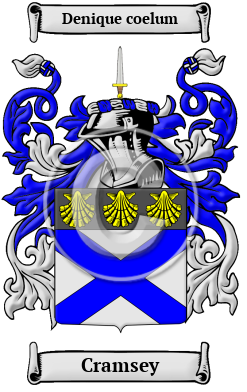 The name Cramsey comes from the Irish Gaelic "O Cnaimhsighe," which was derived from a female personal name. This Irish name was then anglicized to Kneafsey, Crampsey, Bonar, and their variants. Bonar comes from a pseudo translation of Cnaimhsighe, as "cnamh" by itself means "bone."

Early Origins of the Cramsey family

The surname Cramsey was first found in 1095, when the Annals mention Scannlan O Cnaimhsige as the confessor of Lismore. In 1584 Philip MacShane Y Neasy was on of Lord Viscount Roche's men, and was probably a northern Irish mercenary.

Early History of the Cramsey family

This web page shows only a small excerpt of our Cramsey research. Another 86 words (6 lines of text) covering the years 1659 and 1665 are included under the topic Early Cramsey History in all our PDF Extended History products and printed products wherever possible.

More information is included under the topic Early Cramsey Notables in all our PDF Extended History products and printed products wherever possible.

Migration of the Cramsey family

Some of the first settlers of this family name or some of its variants were: Michael Crampsey and Patrick Bonar, who arrived in Philadelphia in 1816 and 1817; Mary Crampsay, who sailed to Baltimore in 1821; Shane, Mary, and Danieal Crampsey, who immigrated to St. John, New Brunswick in 1847.