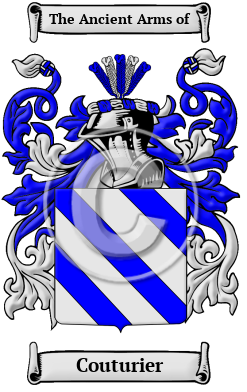 Early Origins of the Couturier family

The surname Couturier was first found in Limousin, where the family first originated as one of the distinguished families of the region. In Limousin, members of the family intermarried with other important families of the day, such as the Renon family. Many members of this family were well known for their contributions to the culture and politics of their respective communities.

Guillaume Couture, born in 1617, son of Guillaume and Madeleine (née Malet), travelled from Rouen, France to Canada in 1640. After his arrival he worked as a land clearer and as an interpreter for the Jesuit Fathers in Quebec. He married Anne Aymart, born in 1629, on 16th November 1649. They settled together in Quebec until Anne's death on 18th June 1700, and Guillaume's death in 1702. [1]

Early History of the Couturier family

This web page shows only a small excerpt of our Couturier research. More information is included under the topic Early Couturier History in all our PDF Extended History products and printed products wherever possible.

Another 44 words (3 lines of text) are included under the topic Early Couturier Notables in all our PDF Extended History products and printed products wherever possible.

Couturier migration to the United States +

Immigration to New France was slow; therefore, early marriage was desperately encouraged amongst the immigrants. The fur trade attracted migrants, both noble and commoner. 15,000 explorers left Montreal in the late 17th and 18th centuries. By 1675, there were 7000 French in Quebec. By the same year the Acadian presence in Nova Scotia, New Brunswick and Prince Edward Island had reached 500. In 1755, 10,000 French Acadians refused to take an oath of allegiance to England and were deported to Louisiana. The French founded Lower Canada, thus becoming one of the two great founding nations of Canada. The distinguished family name Couturier has made significant contributions to the culture, arts, sciences and religion of France and New France. Amongst the settlers in North America with this distinguished name Couturier were

Couturier Settlers in United States in the 18th Century

Couturier Settlers in United States in the 19th Century

Couturier Settlers in Canada in the 17th Century

Couturier Settlers in Canada in the 18th Century