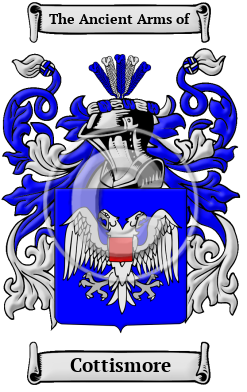 Early Origins of the Cottismore family

The surname Cottismore was first found in Oxfordshire at Cottesford, a small parish, in the union of Bicester, hundred of Ploughley. [1]

Early History of the Cottismore family

Distinguished members of the family include John Cottisford (d. 1540?), Rector of Lincoln College, Oxford, educated at Lincoln College. He served as proctor for 1515, and, on the resignation of Thomas Drax, was elected rector of his college (2 March 1518). This office he held for nearly twenty years. He was also 'commissary' or vice-chancellor of the...
Another 56 words (4 lines of text) are included under the topic Early Cottismore Notables in all our PDF Extended History products and printed products wherever possible.

Migration of the Cottismore family