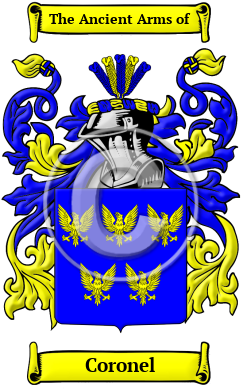 From the historical and enchanting region of Spain emerged a multitude of noble families, including the distinguished Coronel family. Originally, the Spanish people were known only by a single name. The process by which hereditary surnames were adopted in Spain is extremely interesting. Surnames evolved during the Middle Ages when people began to assume an extra name to avoid confusion and to further identify themselves. Often they adopted names that were derived from nicknames. Nickname surnames were derived from an eke-name, or added name. They usually reflected the physical characteristics or attributes of the first person that used the name. The name Coronel is a nickname type of surname for a person that was loved by his family and friends having derived from the Spanish word "caro," which was itself derived from the Latin word "carus," which means beloved or dear.

Early Origins of the Coronel family

The surname Coronel was first found in Galicia, in the northwestern corner of Spain.

Early History of the Coronel family

Prominent among members of the family were María Alonso Coronel, wife of Castilian hero Alonso Pérez de Guzmán, "The Good", whom she married in 1282; fourteenth century noblewoman Aldonza Coronel, King Pedro I's mistress, who later became Abbess of the convent of Santa Inés; her sister María Coronel, founder of the convent; sixteenth century physicist Luis Coronel; his brother, linguist Pablo Coronel; Francisco Vázquez de Coronado y Luján (1510-1554), a Spanish conquistador, who visited New Mexico and other parts of what are now the southwestern United States between 1540 and 1542; and his nephew, Juan Vásquez de...
Another 97 words (7 lines of text) are included under the topic Early Coronel Notables in all our PDF Extended History products and printed products wherever possible.

In the United States, the name Coronel is the 8,585th most popular surname with an estimated 2,487 people with that name. [1]

Coronel migration to the United States +

Coronel Settlers in United States in the 16th Century

Coronel Settlers in United States in the 19th Century