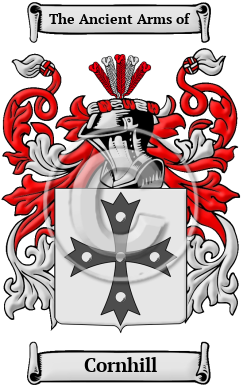 Early Origins of the Cornhill family

The surname Cornhill was first found in Kent where they were a baronial family, of whom William Corniole held a barony there at the time of the Domesday Book of 1086. [1]

William of Cornhill (d. 1223), was Bishop of Coventry and Lichfield and belonged to a family several members of which were high in the service of Henry II and his sons. "Their name indicates their London origin, and the first mentioned, Gervase of Cornhill, was sheriff of London early in Henry II's reign. He afterwards became an itinerant justice, and was sheriff of Surrey and Kent for many years. He left three sons, Henry, Reginald, and Ralph, of whom Reginald was the most conspicuous. This Reginald also was sheriff of Kent for a very long period, the principal interests of the family being now centred in that county. He was a close friend of King John, and hated as one of the cruellest of his evil counsellors. It was under his auspices that Cornhill, who was probably his nephew, but possibly his son, first entered into public life. About 1204 Cornhill's name begins to appear frequently in the records as a royal clerk and an officer of the exchequer. In that year he received from King John the grant of some houses in London." [4]

Early History of the Cornhill family

This web page shows only a small excerpt of our Cornhill research. Another 81 words (6 lines of text) covering the years 1670, 1455 and 1487 are included under the topic Early Cornhill History in all our PDF Extended History products and printed products wherever possible.

More information is included under the topic Early Cornhill Notables in all our PDF Extended History products and printed products wherever possible.

Cornhill migration to the United States +

Cornhill Settlers in United States in the 17th Century

Cornhill Settlers in United States in the 18th Century

Cornhill Settlers in New Zealand in the 19th Century