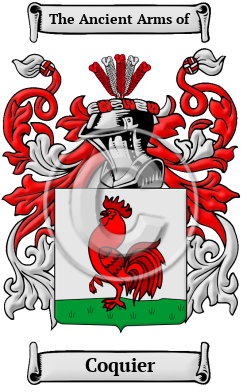 The French surname Coquier is of nickname origin, deriving from a physical or personal characteristic of the original bearer of the name. The name Coquier is derived from the French term "coq" and was used to refer to one who was confident or "cocky."

Early Origins of the Coquier family

The surname Coquier was first found in Poitou, where the family had been established for many centuries, and held many lands and estates.

Early History of the Coquier family

This web page shows only a small excerpt of our Coquier research. Another 70 words (5 lines of text) covering the years 182 and 1822 are included under the topic Early Coquier History in all our PDF Extended History products and printed products wherever possible.

More information is included under the topic Early Coquier Notables in all our PDF Extended History products and printed products wherever possible.

Migration of the Coquier family