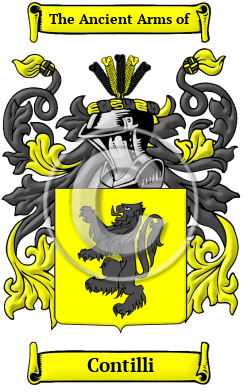 The surname Conti derives from the word "conte," which is itself derived from the Latin comes "comitis," which literally means companion and was then defined as a servant in the retinue of a king or emperor. The term "count" had already become defined as a high-ranking dignitary by the Middle Ages.

Early Origins of the Contilli family

The surname Contilli was first found in the cities of Ferrara, Venice, Milan, Pavia, Assisi, Bologna, and Padua. Contarini is one of the founding families of Venice and one of the oldest families of the Italian Nobility. One of the oldest records of the family was Marco Aurelio Contarini, Roman Consul elected at Padua, took part in the third Consular Triumvirate of Rialto, from 425 to 426. From this early beginning, the family had a long list of positions of authority including: Marco Aurelio Contarini, one of 12 Tribunes who elected the first Doge in 697; Luigi Contarini, Procurator of San Marco in 864; Antonio Contarini, Procurator of San Marco in 865 and many more.

Early History of the Contilli family

Prominent among members of the family was Conte, Cardinal of Milan in 1099; Ardiccione and Bartolomeo Conte, Bishops in Modena and Novara, respectively; Bernardo Conte, "president" of Turin around this time; Federico Contarelli, head of the Guelph faction in Ferrara in 1206; Matteo Contarelli considered the wisest man in the law courts of the day; Alessandro Contareno brought his family to Ferrara from Venice 1308, commencing a line of respected scientists, authors, and artists who brought prestige to Ferrara and to the Contareno name; the Contarini family in Venice was considered one of the 12 top families in the noble class...
Another 177 words (13 lines of text) are included under the topic Early Contilli Notables in all our PDF Extended History products and printed products wherever possible.

Migration of the Contilli family

Some of the first settlers of this family name or some of its variants were: Baldain Conte and Nicolo Loconte, who arrived on S.S. Olympia from Naples at the Port of New York on 25 July 1896; Ferdinando Conte, who landed at New York from Palermo January 7, 1881 aboard the S.S. Vincenzo Florio.