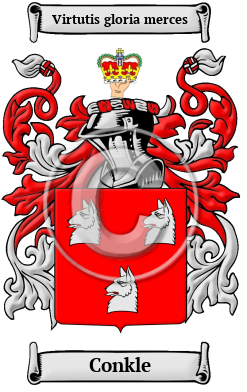 Early Origins of the Conkle family

The surname Conkle was first found in early documents where it was derived from the Dutch word "konkelen" which means "plot, intrigue, conspire."

Alternatively, the name could have originated from the root name "Con," which means "bold, wise, knowing, and klein, little or son." [1]

Another source notes that name could denote a "descendant of the petty king or chieftain." [2]

Early History of the Conkle family

This web page shows only a small excerpt of our Conkle research. More information is included under the topic Early Conkle History in all our PDF Extended History products and printed products wherever possible.

Spelling variations of this family name include: Conklin, Conkling and others.

From this era of Dutch history, those of this who distinguished themselves included those who were listed in the 1984 edition of the Report of Distribution of Surnames in the Social Security Number File which lists the surnames Conklin and Conkling collectively as the 1,178th most popular surname in the United...
Another 51 words (4 lines of text) are included under the topic Early Conkle Notables in all our PDF Extended History products and printed products wherever possible.

In the United States, the name Conkle is the 12,657th most popular surname with an estimated 2,487 people with that name. [3]

Conkle migration to the United States +

Conkle Settlers in United States in the 19th Century