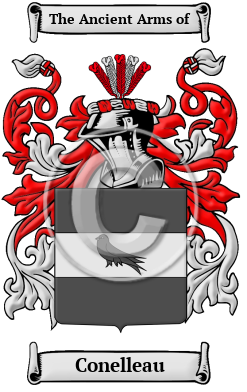 Early Origins of the Conelleau family

The surname Conelleau was first found in Ile-de-France.

Early History of the Conelleau family

This web page shows only a small excerpt of our Conelleau research. More information is included under the topic Early Conelleau History in all our PDF Extended History products and printed products wherever possible.

Notable amongst the family was Hervé Le Coniac, who was councillor at the parliament in 1614 and author of the "History of Bretagne from fabulous times until the reign of Henry II." Jean Le Coniac was commissioner councillor in 1650, and Yves, his son, was received at the parliament. Jean Le Coniac was a farmer of the county of Quintin and was honored with noble status in 1691; Jean-Louis de Connac d'Harteville was a camp Marshall in 1740; François-Alexandre-Henri Conneau, born in 1803 in Milan, where his father was an imperial state employee, was, at the age of 17, secretary of...
Another 100 words (7 lines of text) are included under the topic Early Conelleau Notables in all our PDF Extended History products and printed products wherever possible.

Conelleau Settlers in Canada in the 19th Century