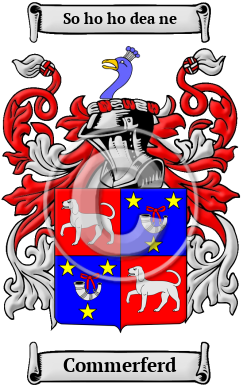 The 12th century Anglo-Norman Conquest of Ireland lead by Strongbow introduced the first non-Gaelic elements into Irish nomenclature. The surname Commerferd came to Ireland from England at that time. It came originally from the name of a village in Staffordshire, and as such belongs to the category of Anglo-Norman habitation names, which are derived from pre-existing names for towns, villages, parishes, or farmsteads.

Early Origins of the Commerferd family

The surname Commerferd was first found in Kent, England before making its way to Ireland. The name has become almost nonexistent in England. There are Domesday references to the surname in Kent. [1]

Early History of the Commerferd family

Since church officials and medieval scribes spelt each name as it sounded to them; as a result, a single person could accumulate many different versions of his name within official records. A close examination of the origins of the name Commerferd revealed the following spelling variations: Comerford, Comfort, Comport, Comberford, Cummerford, Cumerford, Commerford, Cumfort, Cumport, Comfurt, Compart, Cumberford and many more.

Notable amongst the family up to this time was Dr. Nicholas Quemerfod, Comberford, Comerford (c.1542-1599) of Waterford, religious scholar and lecturer, who was the first of sixteen Jesuits of the name. Born in Waterford, he took the degree of B.A. at Oxford in 1562, after he had spent at least four years in that university. "After completing his degree by determination he returned to Ireland, was ordained priest, and obtained some ecclesiastical preferment from which he was ejected on account of his...
Another 82 words (6 lines of text) are included under the topic Early Commerferd Notables in all our PDF Extended History products and printed products wherever possible.

Migration of the Commerferd family

During the middle of the 19th century, Irish families often experienced extreme poverty and racial discrimination in their own homeland under English rule. Record numbers died of disease and starvation and many others, deciding against such a fate, boarded ships bound for North America. The largest influx of Irish settlers occurred with Great Potato Famine of the late 1840s. Unfortunately, many of those Irish that arrived in Canada or the United States still experienced economic and racial discrimination. Although often maligned, these Irish people were essential to the rapid development of these countries because they provided the cheap labor required for the many canals, roads, railways, and other projects required for strong national infrastructures. Eventually the Irish went on to make contributions in the less backbreaking and more intellectual arenas of commerce, education, and the arts. Research early immigration and passenger lists revealed many early immigrants bearing the name Commerferd: James Comerford, who settled in America in 1764; Frederic Comerford settled in Philadelphia, Pennsylvania in 1804; followed by John in 1828; Kehone in 1871.