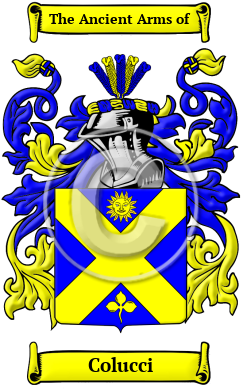 Early Origins of the Colucci family

The surname Colucci was first found in L'Aquila, capital city of the Abruzzo region and of the Province of L'Aquila. Frederick II, Holy Roman Emperor and King of Sicily (1194-1250) began the construction of the city and was completed by his son, Conrad IV of Germany in 1254. Conrad's brother Manfred destroyed the city in 1259 after his brother's death, but it was soon rebuilt by Charles I of Anjou. One of the first records of the name was Angelini Colucci, a writer in Ascoli in the 12th century.

Early History of the Colucci family

This web page shows only a small excerpt of our Colucci research. Another 88 words (6 lines of text) are included under the topic Early Colucci History in all our PDF Extended History products and printed products wherever possible.

Spelling variations of this family name include: Colucci, Coluzzi, Culozzi, Coluccia, Collucia and many more.

More information is included under the topic Early Colucci Notables in all our PDF Extended History products and printed products wherever possible.

In the United States, the name Colucci is the 6,448th most popular surname with an estimated 4,974 people with that name. [1]

Colucci migration to the United States +

Colucci Settlers in United States in the 20th Century