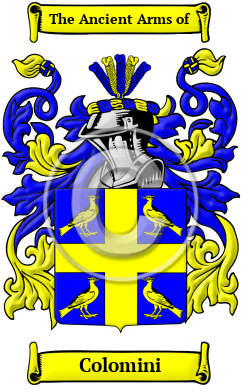 The surname Colomini is derived from the Italian word "colombo," which in turn comes from the Latin "columbe," meaning "dove." As a surname, it may have been occupational for someone who raised and sold doves. The popularity of the personal name Colombo, which was prevalent in the Middle Ages, may be explained by the fact that the dove is the symbol of the Holy Spirit and is an expression of endearment and love.

Early Origins of the Colomini family

The surname Colomini was first found in Genoa (Italian: Genova), a port on the Gulf of Genoa, capital of the province of Genoa. 4th century B.C it was occupied by the Greeks, destroyed by the Carthaginians in 209 B.C and restored by Rome who made it their headquarters. They survived the Lombard and Carolingan intrusions. Were well known for their naval prowess. Shipbuilding flourished in this natural sea port. Much migration took place to South America pre WWII. In those ancient times only persons of rank, the podesta, clergy, city officials, army officers, artists, landowners were entered into the records. To be recorded at this time, at the beginning of recorded history, was of itself a great distinction and indicative of noble ancestry.

Early History of the Colomini family

Prominent among members of the family was Cristoforo Colombo (Christopher Columbus), born in 1451 in Genoa; he became a talented navigator and is famous today for his discovery of America in 1492. Others of the name include Iacopo Colombi of Pistoia, a lawyer in 1199; Antonio Colombella, Bishop of Senegallia during the 14th century; Giovanni Colombini (c.1300-1367), an Italian merchant, and founder of the Congregation of Jesuati; Veronese Colombino, a respected poet in...
Another 73 words (5 lines of text) are included under the topic Early Colomini Notables in all our PDF Extended History products and printed products wherever possible.

Migration of the Colomini family