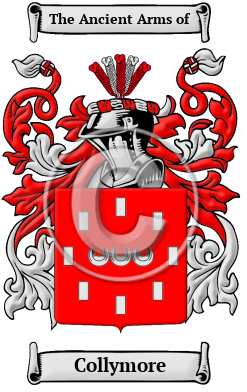 Early Origins of the Collymore family

The surname Collymore was first found in Shropshire at Colemore, a parish, in the union of Petersfield, hundred of Barton-Stacey. "This parish, noticed in the Domesday Survey and other records under the name of Colmere, is supposed to have derived that appellation from the situation of the greater portion of it, formerly, near the western mere or boundary of the ancient forest of Wolmer, where great quantities of charcoal were made." [1]

Early History of the Collymore family

More information is included under the topic Early Collymore Notables in all our PDF Extended History products and printed products wherever possible.

Migration of the Collymore family

Some of the first settlers of this family name or some of its variants were: Isaac Colamore landed in Boston in 1643; Grace, Mary, and Mathew Cullamore all arrived in Nova Scotia in 1750; Thomas Cullamore settled in Maryland in 1637..