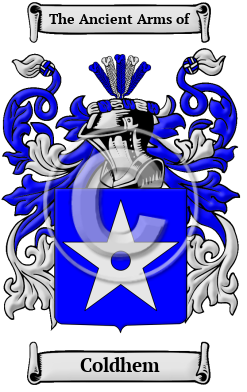 Early Origins of the Coldhem family

The surname Coldhem was first found in Cambridgeshire at Coldham, a hamlet in Elm civil parish, part of the Fenland district. Coldham Estate in Cambridgeshire is a co-op farm today but Roman remains can be found there giving evidence to ancient Roman farms from late-Roman fenland settlements. The name is derived from the Old English word "cald" meaning "cold" and "ham" meaning "homestead." [1] Coldham Hall is a Grade I listed building which was built in 1574 for Sir Robert Rookwood.

Early History of the Coldhem family

More information is included under the topic Early Coldhem Notables in all our PDF Extended History products and printed products wherever possible.

Migration of the Coldhem family