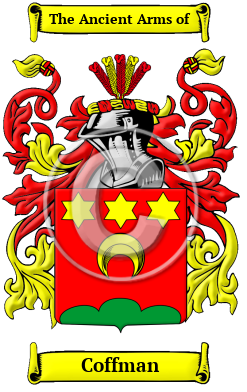 The distinguished surname Coffman is a proud symbol of a Jewish culture, which is found in many places world-wide. In the Middle Ages, it became necessary to adopt surnames, since people were moving closer together, and it was becoming difficult to distinguish between people with the same names. The surname Coffman is an occupational surname, which belongs to the category of hereditary surnames. This surname was given to a banker, pawnbroker, or usurer. It derives from the German word lehenen, which means to lend.

In the United States, the name Coffman is the 1,191st most popular surname with an estimated 24,870 people with that name. [1]

Coffman migration to the United States +

Coffman Settlers in United States in the 19th Century

Historic Events for the Coffman family +

Suggested Readings for the name Coffman +