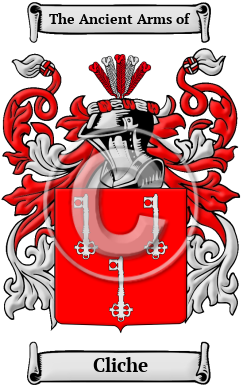 Early Origins of the Cliche family

The surname Cliche was first found in Champagne.

Early History of the Cliche family

This web page shows only a small excerpt of our Cliche research. More information is included under the topic Early Cliche History in all our PDF Extended History products and printed products wherever possible.

Spelling variations of this family name include: Cliche, Cliché, Clichy, Clicquot, Clicquet, Clocquet and many more.

Notable amongst the family during this period was Robert Clicquot, born in Reims in 1645, who came from a family of organ builders. As soon as he was twelve years old, he learned his first lessons on the art of organ construction. His son, Francois-Henri, is the most famous member of the family, being the most illustrious of the ancient french organ builders. His first work was the organs of Saint Louis of Versailles, which Louis XV enjoyed. Robert Clicquot (1645-1719) was a French organ builder from Paris. His most notable organs are in the Chapel of the Palace of Versailles...
Another 168 words (12 lines of text) are included under the topic Early Cliche Notables in all our PDF Extended History products and printed products wherever possible.

In Quebec, Canada, the name Cliche is the 631st most popular surname. [1]

Cliche Settlers in Canada in the 17th Century

Cliche Settlers in Canada in the 18th Century