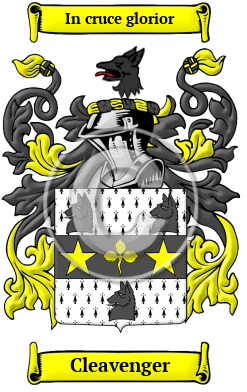 The surname Cleavenger is derived from the Old English word "clif," which means cliff, rock, or steep descent. It is thought to have been a name used for someone who lived near a sloping cliff or the bank of a river. As such, the surname Cleavenger belongs to the class of topographic surnames, which were given to people who resided near physical features such as hills, streams, churches, or types of trees.

Early Origins of the Cleavenger family

The surname Cleavenger was first found in Shropshire and Cheshire. The latter county "in the hundred of Northwich, is Clive, from whence their ancestor Warin assumed his name in the time of Henry II. About the reign of Edward II the family removed to Huxley, also in Cheshire, Henry de Clive having married the co-heiress. " [1]

The Shropshire branch claim descent from the village and civil parish so named. "James Clive with the heiress of Styche, of Styche, they settled in Shropshire at that place, which is in the parish of Moreton-Say, and has remained uninterruptedly in the Clive family." [1]

Henry de Cliff (d. 1334), the English judge, "is first mentioned as accompanying the king abroad in May 1313; and on 11 May 1317, as a master in chancery, he had charge of the great seal at the house of the Lord Chancellor, John de Sandale, Bishop of Winchester. There is another master in chancery in Edward II's reign of the same name, probably a brother. " [2]

Early History of the Cleavenger family

Welsh surnames are relatively few in number, but they have an inordinately large number of spelling variations. There are many factors that explain the preponderance of Welsh variants, but the earliest is found during the Middle Ages when Welsh surnames came into use. Scribes and church officials recorded names as they sounded, which often resulted in a single person's name being inconsistently recorded over his lifetime. The transliteration of Welsh names into English also accounts for many of the spelling variations: the unique Brythonic Celtic language of the Welsh had many sounds the English language was incapable of accurately reproducing. It was also common for members of a same surname to change their names slightly, in order to signify a branch loyalty within the family, a religious adherence, or even patriotic affiliations. For all of these reasons, the many spelling variations of particular Welsh names are very important. The surname Cleavenger has occasionally been spelled Cliffe, Cliff, Clive, Cleeves, Cleave, Cleaves and many more.

Prominent amongst the family during the late Middle Ages was William Clyffe (d. 1558), English divine, educated at Cambridge, where he graduated LL.B. in 1514, was admitted advocate at Doctors' Commons on 16 Dec. 1522, graduated LL.D. in 1523, was commissary of the diocese of London between 1522 and 1529. In 1526, he was appointed Archdeacon of London and three years later, Prebendary of Fenton in the church of York in 1532. [2] Catherine Clive, daughter of William Raftor, an Irish gentleman, was born in London in 1711. Displaying a natural aptitude for...
Another 92 words (7 lines of text) are included under the topic Early Cleavenger Notables in all our PDF Extended History products and printed products wherever possible.

Migration of the Cleavenger family

The Welsh migration to North America in the late 19th and early 20th centuries contributed greatly to its rapid development. These migrants were in search of land, work, and freedom. Those Welsh families that survived the long ocean journey were critical to the development of new industries and factories, and to the quick settlement of land. They also added to an ever-growing rich cultural heritage. A search of the immigration and passenger lists has shown a number of people bearing the name Cleavenger: Thomas Cleaves who settled in Virginia in 1653; George Cleeves settled in Portland Maine in 1630 with his wife Joan; Daniel and Sarah Cliff arrived in New York in 1823 with six children.

Motto: In cruce glorior
Motto Translation: I glory in the cross.