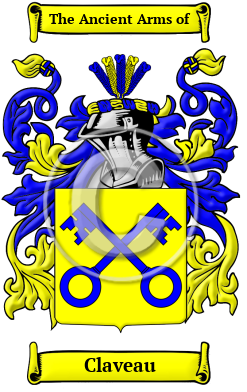 The prestigious surname Claveau originated in the beautiful and majestic region of Poitou in France. France was notorious for its eccentric kings, but it was revered for its contributions to European art and culture. The surname Claveau originally came from the region of Poitou. It is a topographical name, which is a type of hereditary surname. Topographical surnames were taken from physical features or landmarks that the family lived near.

Early Origins of the Claveau family

The surname Claveau was first found in Poitou, where the family was anciently established in a village of Aunis, in the department of Charente-Inférieure, in the district of La Rochelle.

Early History of the Claveau family

This web page shows only a small excerpt of our Claveau research. Another 67 words (5 lines of text) covering the years 1815, 1826, 1835, and 1881 are included under the topic Early Claveau History in all our PDF Extended History products and printed products wherever possible.

More information is included under the topic Early Claveau Notables in all our PDF Extended History products and printed products wherever possible.

Claveau migration to the United States +

Claveau Settlers in United States in the 19th Century

Claveau Settlers in Canada in the 18th Century